“Be the change you want to see in the world” (Gandhi)

The key message received by volunteers in Kampala, Uganda on International Women’s Day, a national public holiday. Dressed in the day’s thematic colours of white and orange, our group of volunteers, Team Leaders and in-country staff joined many others at a conference partnered by Challenges Worldwide at The Innovation Centre in Ntinda.  Armed with the globally trending hashtag “BeBoldForChange” our team were ready to gain first-hand insight into life as a working woman in Uganda.

The message was one which we can all relate to and received by both men and women. It was a day for not only recognising women in Uganda but recognising the changes that we as individuals can make to generate a more equal and inclusive society. Nonetheless, we learnt that 70% of the world’s poor are women and face many challenges in health, education and their role within society which for some women the consequence of their actions could be life or death.

Three inspirational women, two from Uganda and one from Afghanistan formed the panel discussion to commence the event. Godiva Monica Akullo, a feminist, lawyer and human rights activist encouraged women to stand up for change. She shocked the room when she spoke about one of her own experiences: working for a Ugandan law firm and attending a conference as not only the youngest but also the only female, she was approached by a male client who asked if she could pour him a coffee. As a professional and Harvard lawyer graduate she did not let this pass and made her opinions known. Since this day, she believes in empowering women to take action such that men feel their presence in the room.

Among the other panellists was Evelyn Namara, founder of Innovate and an ICT specialist, believing women can be better in technology advancement, breaking stereotypes and mindsets and advocating that girls should grow up with the same opportunities as boys. Captain Babra, a Ugandan army captain also stood up to encourage young girls to follow their dreams because nothing is impossible.

“girls should grow up with the same opportunities as boys”

All the women spoke with such passion and emphasis on how women in Uganda will continue to speak up about this topic until the day they are viewed as equal human beings. However, it was Betty Ogiel Rubanga, author of Against All Odds and an example of the life-changing benefits of education for girls and women, whose story truly inspired. Over ten years ago she was caught up in a road accident, crushing all dreams of becoming an athlete (being able to run 100m in 12.8 seconds, pathed out a potential career), leaving her partially paralysed down the right side of her body and with a speech impairment which would impact on the rest of her life. As she translated these memories into words and spoke of her experiences she moved many in the room to tears. Her message, however, was clear as she went on to discuss the five things that made her excel at life, without which she would not be the women she is today: 1. Working hard; 2. Making wise decisions; 3. Be yourself; 4. Be the author of your destiny; 5. Positive mental attitude.

So the question is: how are we being the change we want to see in the world?

As volunteers with Challenges Worldwide, we have already made this leap. Working to promote development through small-medium sized enterprises, many owned by women we are being active in making the change that we want to see happen in the world. 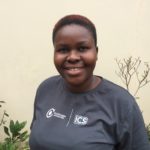