From Kumasi to the Houses of Parliament: The Power of Photography

Last June, I departed the UK on what was sure to be an adventure. I was heading to Kumasi, Ghana as a team leader with Challenges Worldwide for 3 months. Although I had no idea what lay ahead of me as I began that 24 hour journey to Accra with the other team leaders, I could never have envisioned that, fast forward 7 months, I would be stood speaking about my experiences at the Houses of Parliament in front of the head of DFID, Lords, Ladies and a group of MPs.

When I applied for an ICS placement, I had just secured a job in London and was looking for something to fill my final extended summer. I wanted to travel, but having already taken a few too many ‘gap years’, this time I wanted to give something back. I’d heard horror stories about the voluntourism industry: “They’ll knock down anything you build for the next group”, “You’re money’s going to a selfish and greed-driven organisation”, “Why are you paying to volunteer your own personal time?” These are all valid points that highlight real issues around this industry, and they resonated in my mind as I searched the internet for opportunities to combine my wish to travel with my want to do some good.

“Why are you paying to volunteer your own personal time?”

ICS was something I learned about from Facebook. The DFID funding gave it credibility, the opportunity to work in partnership with other young people was unique, and the breadth of projects and countries was exciting. I had no real idea as to where in the world I’d like to end up or with which organisation, I just knew that I wanted to be involved in an entrepreneurial-focused initiative. Everything I’d read and believed pointed towards the sustainability of development when the power of business was harnessed in the solution. No more questions about what happens when the funding stops and the volunteers leave; upskilling business owners and making a positive impact to an economy as a whole should have a far reaching and long lasting positive impact. Two weeks after my initial application, I heard I would be interviewing for Challenges Worldwide. Another quick trip to my go-to google and I realised this project aligned perfectly with my aspirations.

No more questions about what happens when the funding stops and the volunteers leave; upskilling business owners and making a positive impact to an economy as a whole should have a far reaching and long lasting positive impact. 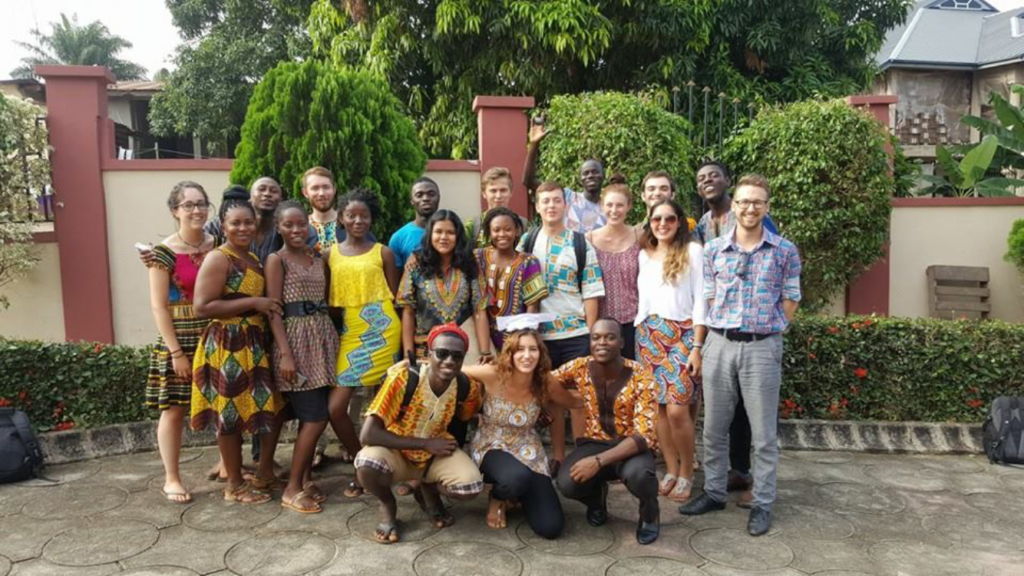 The work the volunteers did whilst on placement was fantastic. Over the space of the 3 months, they made a real impact on 9 businesses within Kumasi. However, what led me to the Houses of Parliament, and what I’ll focus on in this blog post, is the social impact that bringing a diverse range of people and a community together can have.

For those who have not been on a Challenges placement, I’ll give a quick explanation. Alongside their day-to-day work, whilst in country volunteers are split into four groups:

As a team leader, I headed up the Communications and Impact Day teams, and my counterpart Lukman took charge of the MPR and Social committees.

It’s at this point that I’d like to challenge you to take a look at the below picture and ask yourself: what you believe you see?

We’ll revisit the answer to that shortly – but first, I’m going to explain how this picture, and the Impact day it was taken at, came about.

As previously mentioned, part of every ICS project is a team “Impact Day”. Although the eventual outcome of this event is tackling a social problem, it was clear that due to the nature of the Challenges programme it would be best to take an entrepreneurial approach.

The easiest way for a group of newcomers to a city to do this would be to join forces with an already established network. In our case, however, Challenges was as new to Kumasi as we volunteers were, meaning we had no existing connections. We, therefore, set about searching for charities and volunteer groups, talking to host homes and businesses, looking online, and reaching out to friends.

An orphanage affiliated with one of our businesses approached us for help. However, in order to mitigate the ‘voluntourism’ risk that I spoke about before, there has been a shift away from working with children on any Challenges Worldwide ICS placement. Challenges’ 20 years of expertise centres around sustainable business development in emerging economies and their work delivering ICS seeks to disrupt the status quo of unskilled young westerners undertaking short-term projects that can cause more harm than good. Therefore we were encouraged to approach our impact day activities with sustainability and long-term outcomes in mind.

Weeks passed, and ideas came and went. We all wanted to make a real lasting impact in the community that had welcomed us so nicely, but – like anything in a developing country – overcoming obstacles was a daily challenge. Thankfully, using prior university contacts from home, I managed to contact a social enterprise, SanEco, who wanted to help. Saneco is the brainchild of The University of Southampton’s Enactus Society. In short: SanEco have identified a way to create reusable sanitary towels from readily available and affordable materials. They train unemployed members of communities to make and market these products with a focus on also educating women on their bodies and menstrual cycles. Through this initiative, social entrepreneurs are created. By increasing these people’s income, they directly tackle poverty levels. These entrepreneurs also increase the standard of living of the females in their communities, who would now have access to affordable sanitary products, allowing them to continue with their normal lives whilst menstruating.

I pitched the idea to the Programme Manager and our Impact Day Committee and they all loved it – but they would, as a predominantly female team who understood these issues and were comfortable speaking on the topic. The real issue would be introducing the concept to the male members of the wider team and, as expected, there were mixed reactions. We, as Westerners, like to believe that we stand for equality and share the mutual respect to discuss health issues and topics such as the natural processes of the female body. It’s all too easy to think that the male/female divide is only now a problem in lesser developed areas; however, initial reactions to the Saneco topic highlighted that so-called ‘taboo subjects’ are also still prevalent in Western society.

It’s all too easy to think that the male/female divide is only now a problem in lesser developed areas; however, initial reactions to the SanEco topic highlighted that so-called ‘taboo subjects’ are also still prevalent in Western society.

After a few difficult conversations and a hard stance from the Impact Day team that this was how we would proceed, we got everyone on board. We would deliver workshops in the morning, transferring skills that are essential to any business: budgeting, marketing and bookkeeping, to name a few. We would then introduce the SanEco programme in the afternoon, and apply what we had taught in the morning to the product.

The team were excited and the day began building momentum. We bought materials, secured a venue, did shout outs on the radio, printed and handed out flyers, reprinted and red-handed out flyers and attended church ceremonies to spread the word. Before we knew it, the day was upon us and all we could do was wait to see if anyone turned up.

Anyone who has been to Ghana will be well aware of GMT (Ghana man time). To those who haven’t, this is the name given to the fact that it is perfectly acceptable to show up to arrangements hours after the agreed time. A bizarre concept for people from the UK to wrap their heads around. Thankfully, it appeared that GMT was running particularly close to regular Ghana time this day, and at just 45 minutes after our planned start day, the room had over 20 people in (both male and female, from babies to grandmothers!)

The morning workshops went without a hitch. The participants were actively engaged, offering examples, asking questions and genuinely enjoying themselves. We broke for lunch and got ready to introduce SanEco.

There was a buzz in the air. We had decided to market the initiative only as a new ‘social enterprise idea,’  in order not to discourage anyone from attending before they understood the initiative. However, to our surprise, when we revealed what we would be showing them, the excitement remained in all participants! We began walking them through the process of creating a sanitary pad. Unfortunately, as accomplished as we all felt for pulling off this day, it turns out that we’d overlooked the slight issue that none of us could use a hand operated sewing machine, which was the main component of making these pads. Thankfully, and with some quick thinking, we threw it out to the audience and were extremely relieved when a lady in the front row was more than happy to help. She came up to the front, and in less than a minute, we had our first pad. I pulled out my iPhone and quickly snapped the above image.

When I earlier asked what you thought my picture showed, I’m sure you didn’t guess the answer. A woman empowered by a group of young people with the tools to start her own business tackling women’s needs. 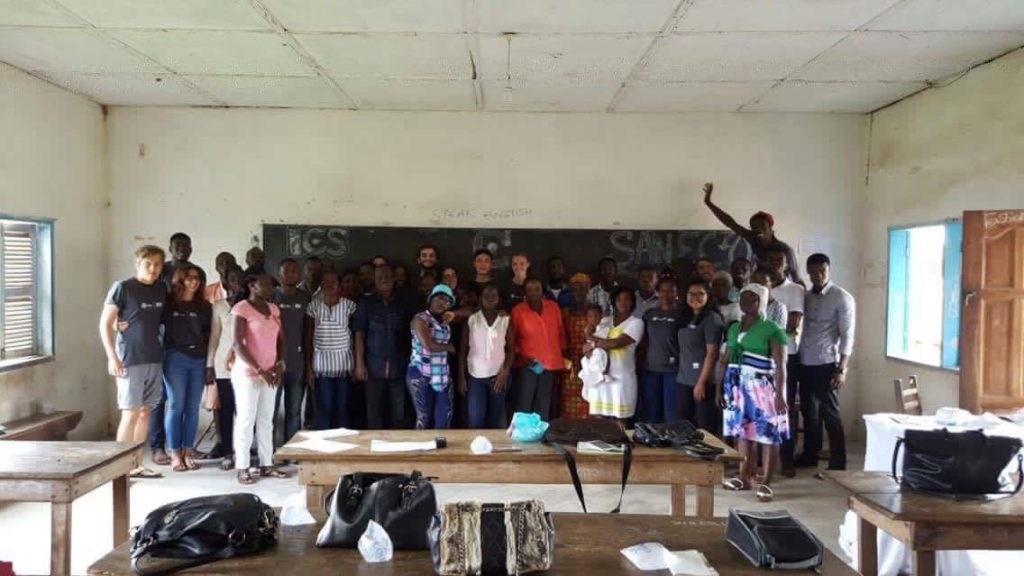 Since returning to the UK, I’ve been overwhelmed by the interest in this image. It’s been in newspapers, been voted top 10 out of over 400 entries in the ICS photography competition and allowed me to attend a showcase at the Houses of Parliament, discussing my experiences with some of the most influential people in the country. The Houses of Parliament showcase was the first time since returning from my placement that I really had the time to sit back and reflect on the difference that we have made and can continue to make. Meeting volunteers from other ICS organisations has reiterated the positive impact that young people are making across the world. Challenges and ICS represent the opposite to most stigmas that are attached to young people nowadays. Lazy? No. Uncultured? No. Shying away from community spirit? Not that I’ve seen.

Challenges and ICS represent the opposite to most stigmas that are attached to young people nowadays. Lazy? No. Uncultured? No. Shying away from community spirit? Not that I’ve seen. 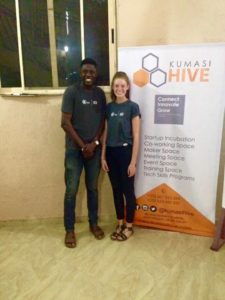 With the changing, and somewhat frightening, world that we live in today, it’s never been more important to spread the word on the positive impacts that collaboration across borders can make. I spent 3 months living in a country where I was a ‘foreigner’, and quite frankly the experience would have been impossible without the welcome, help and support I received from my Ghanaian colleagues. Pictures, to most, are a way of preserving memories. They have always been a very personal experience for me. However, what I’ve learned from this experience is that they also serve as a tool to spark curiosity, spread positivity, and tell a story. I’m not promising all pictures will end up with you in the Houses of Parliament, but I have seen first-hand that people want to know about your placement, they are interested in learning from your experiences and it’s actually pretty fun to relive them through sharing your story.

So: post your pictures, share your stories and remember that the Challenges Worldwide ICS experience is a truly unique one.